This is the second largest shipment form Africa uncovered in the past few weeks.

With the field team having moved out of Cat Tien and the radio tracking of the animals over (hopefully temporarily) it is a good time to share some of the things that we achieved and found out. Hopefully this does not represent the end of the project and but it gives time to evaluate what has been done and plan the next steps.

There were many reasons behind conducting releases. First was that there was a high conservation and ecological value to releasing Sunda Pangolin a) to reinforce depleted populations b) as they represent important ecological engineers and there is no other species filling the  niche that has been vacated through the extensive hunting of this species. Secondly, releases SHOULD WORK-resources are abundant in a highly productive tropical forest and animals should have little/no problem surviving (if released in good condition). Finally, it would enable us to develop release protocols that can be used as guide of best practice, to help reduce the number of animals released immediately after confiscation.

Primarily we wanted to know if the animals survived and in fact we recorded an 80% survival rate. Three of the animals we caught on camera traps 97, 18 and 53 days after release, the other two we radio tracked 6 and 23 days post release.  With this information we then wanted to determine what factors could be used to monitor how an animal is doing post release. For this we monitored range size, the time taken for an animal to establish a stable range and the how often the animal moved sleeping site. From the work of Lim (2007) we predicted that it may take 3-4 weeks to establish a stable home range and that an animal should move sleeping sites every 1-2 nights. However, we were interested to see if this would be the case considering some of these animals had been in captivity for up to 4 years.

Establishment of a stable range indicates that an animal is able to locate important resources and that there is limited or no interaction with conspecifics. In terms of a release program establishing a stable home range in close proximity to the point of release indicates high similarity between source and release site. Two out of the three pangolins tracked for a minimum of three weeks were recorded as their ranges reaching stability, this agrees with the results of Lim (2007) and the data collected from a wild pangolin we tracked and indicates that the criteria used to select release sites (abundance of tree hollows, ant and termite mounds and no evidence of hunting) were suitable. However, it is difficult to confidently evaluate if this is an accurate measure until tracking length is increased. 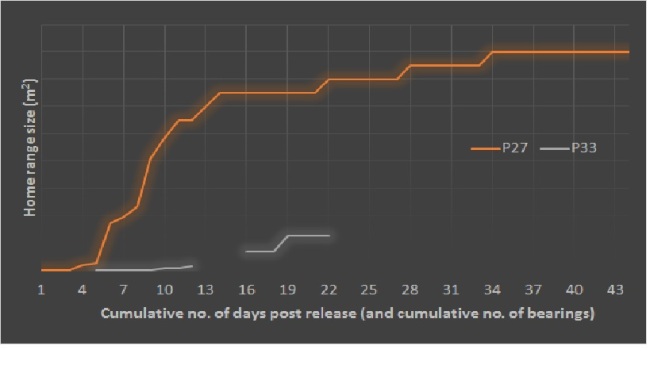 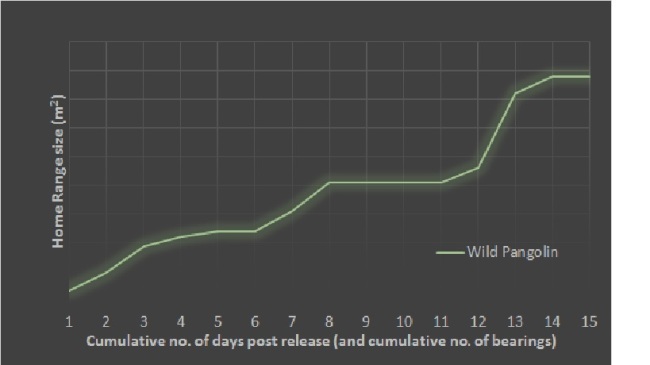 Graphs showing the stability of the ranges for two release pangolins (top graph) and a wild pangolin (bottom graph) in Cat Tien National Park. Stability is reached when the range size stops increasing.

All released individuals showed a higher level of fidelity to sleeping sites compared to wild individuals, this may represent a heightened level of cautiousness after spending a prolonged time in captivity. Most animals utilized a den site for 2-3 consecutive nights before moving on, however, in the case of P27, who died, he was using the same den site for up to 8 consecutive nights and returning to them regularly, this may represent abnormal behaviour. Repeated use of a sleeping site like this was only recorded in natal den use or after the animal had moved through the remainder of its range. 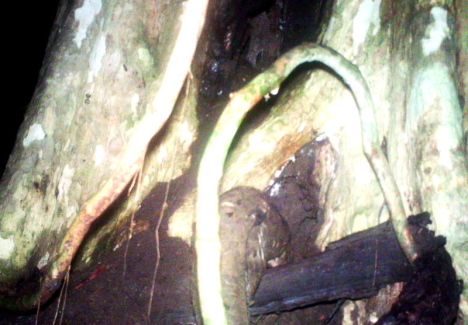 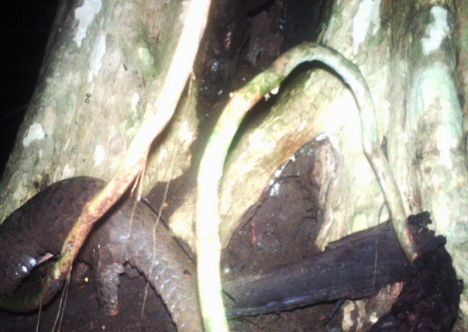 There is a large variation in the sizes recorded for both wild and released Sunda Pangolin and this makes it difficult to use as an indicator to evaluate the success of a release program or monitor how an animal is doing. For this reason, it is recommended that time taken to establish a home range and sleeping site fidelity are the best indicators by which to monitor a Sunda Pangolin post release.

In Cat Tien National Park we have left guidelines on where future releases should take place. So far we have released to maximise male and female overlap and to minimise overlap between male ranges, and the sites we have suggested continue to take that into consideration, while being in areas that have already been assessed as suitable. 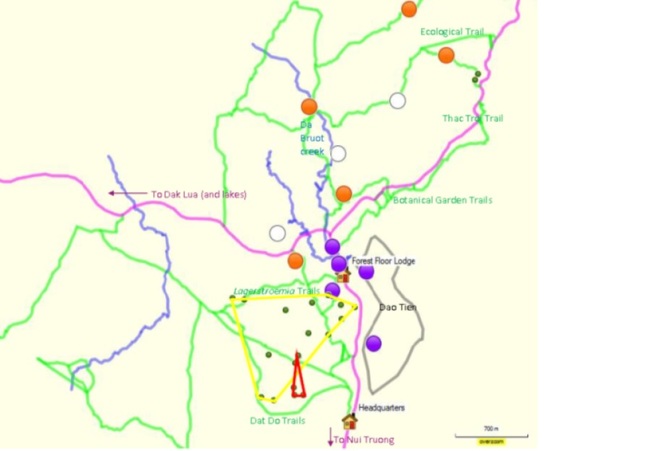 The purple dots represent individual pangolin sightings, the orange and white dots represent future release locations for females and males respectively and the green dots represent all known den site locations. The yellow line is the home range of the wild male tagged, the red line is a released female and the blue lines are water sources.

Please see the below statement from the African Pangolin Working Group regarding the incident. It is scary to see how far the trade is extended, although people have suspected it for a while. 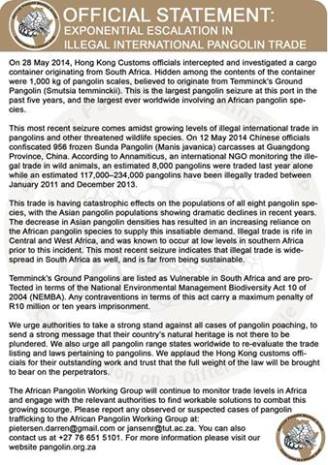