World Pangolin Day 2018 took me back to Nepal and the small village of Yanshila in the Eastern region. Here I worked with an organisation KTK Belt Project who are creating a Vertical University, with different villages at each elevation being in a habitat that is home to an endangered species; a species that can easily be preserved if people became aware of their plight.

According to local knowledge, the forest around the village has both Chinese and Indian pangolin, making protecting the land from ‘land grabbing’ critical. The third Saturday of February, for the seventh year in a row, marked the launch of a campaign to protect this land, an opportunity to donate to the purchase can be found here.

In Yangshila itself, we took the opportunity to really celebrate the pangolin. Outdoor education workshops involved the students writing pangolin ‘Just So’ stories, set in their village. My personal favourite, was Krishna’s who wrote about how the pangolin got its scales – a local resident took it to their house and wove its scales out of their own hair!

In the week before the event, we conducted a small workshop to train local youngsters in how to conduct social surveys, with the view to collect information about how individuals in the village truly view the pangolin and if the awareness being conducted in having any effect. A bit of role play encouraged the students to think about how they  might approach farmers who are less than cooperative.

Finally, on Friday evening, the exhibit was unveiled of the student’s art work. Rangers, government officials, potential poachers and local villagers were guided around the banners by the students, and witnessed the placing of well designed signage in front of the prime habitat. Participants were then invited to sign a banner to pledge their protection of this species.

They were then treated to a series of videos about the pangolin from around the world and finished with the premier screening of a video about pangolins made by local Belt Fellow Ganga Limbu which can be viewed here. 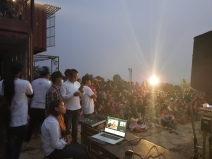 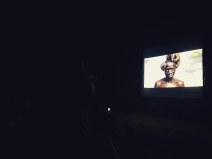 All in all, it was a wonderful event combining art, education and local knowledge to rally a community to really ingrain pangolin into their psyche. Thanks to all involved and to One More Generation for the funding.